Learning and bonding at Mungalla

Year 9 Thuringowa Stars took part in a camp to Mungalla Station north of Townsville recently, as part of our focus on building bonds and strengthening connections between students and their Mentors.

Mungalla Station is owned and run by the Traditional Owners of this area – the Nywaigi people – and provides visitors with an opportunity to explore the rich history and culture of the region.

The camp not only supported our Stars to develop deeper relationships with one another and their Mentors, but also focused on personal wellbeing through the exploration of healthy bush tucker and the importance of looking after country.

They also learnt about some of the history of Mungulla Station, including the Captive Lives story about two groups of Aboriginal people from the Station who were persuaded, by Barnum and Bailey’s agent, R.A. Cunningham, to take part in the Greatest Show on Earth in the USA and Europe.

The girls were shocked to learn that Aboriginal people from Palm and Hinchinbrook Islands, and from the Mungalla Station workforce, were incorporated into the show as ‘curiosities’ and portrayed as ‘Australian Cannibals and Boomerang Throwers’. 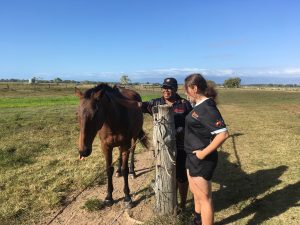